What does it mean to innovate? 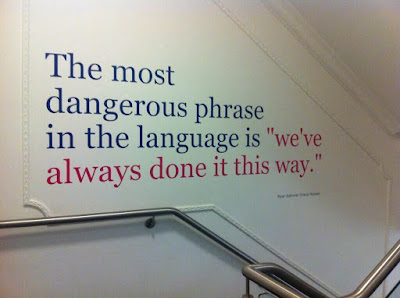 Google has opened their Google Innovator Program (formally their Google Teacher Program) and this year they want applicants to think about an Innovation for education. This prompt got me thinking, What does it mean to Innovate?

There are so many innovative people that I have met over my teaching career, from looking at what I admire in them here is what I think about innovation.

However, as I am asked to think of an Innovation project I do get stuck. Is my idea good enough? Is it innovative enough? Has it been done before? However, this is the frame of mind that blocks innovation. What I do know though is that not everyone is an innovator but that everyone can be. It takes a special drive to be one but a personality that is in us all.  We all can be an innovator, just have to remember that the most dangerous phrase is that it has always been done this way.

What are you doing to be an innovator? How will you change education? Love to hear your thoughts.