Today was our first formal lesson in patterning.  What I mean by that is we have been discussing patterns but more in the context of number sense, where we have been learning to count by twos, fives and tens, as well as, doubling numbers. This type of talk has been focused on the magnitude of numbers and associated with place value not so much on growing and shrinking of patterns.

So today we started with a problem that was asking the students to sort eight sets of (patterns and none-patterns) into two categories, a yes it is a pattern and a no it is not a pattern. I have attached the patterns down below.

It was very interesting conversation around this. At first the students put only the repeating patterns in the yes category stating that for it tone a pattern then it had to repeat. I had to remind them about the book we read called patterns big and small. In this book they had a set of nesting dolls, I'm asked the kids did that pattern repeat? After that discussion the kids where better off explaining their reasons for their groupings.

I really liked this question because it made the students really think about what a pattern is and what attributes are needed to make a pattern. They obviously had worked with patterns in grade one but mainly with repeating patterns, which is why they at first they only made piles with repeating numbers.  The non-patterns are also helpful because they can assist us with thinking about what attributes a pattern doesn't have and therefore in the end has.

Today we are going to be working on the justifying of their answers and then coming up with a definition of what a pattern is and is not.  If your grade two or any grade for that matter I highly recommend this type of problem for your class. 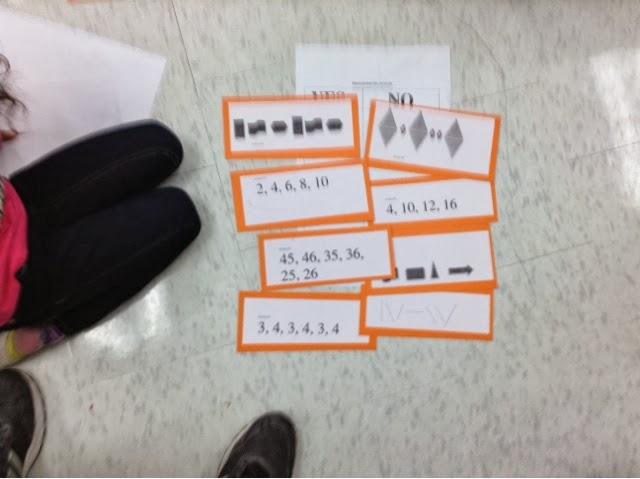 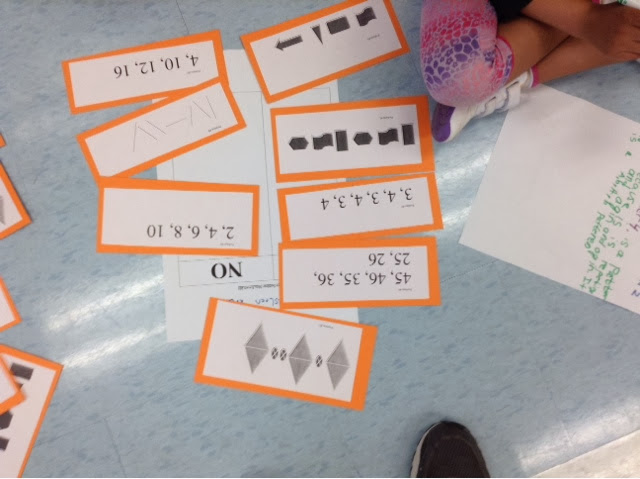 For the patterns we used click on this link: https://www.dropbox.com/s/okxkmomlckfu758/Is%20this%20a%20pattern.docx