My first attempt at a provocations


So I have been reading about provocations a lot from Kristi Bishop, a Vice Principal in the Hamilton Board (@kkeerybi) and from Aviva Dunsinger a teacher in Kristi's school.  In fact it was Aviva who passed Kristi's blog on to me.  At first I was kind of like what is that word "provocations"  I mean I have heard of provoking but to be honest never provocations.  Now I will also admit that language and me do not get along.  It is one of my weakest areas but one that I am constantly working towards getting better.  So it is not surprising that the word was not familiar to me. So like any life long learner I googled the word.  It means testing to elicit a particular response or reflex. I am starting to understand.

Well now that I knew the word I was able to go back and read how Kristi was promoting its use in the classroom.  The more I read the more I wanted to see it in action.  I looked to kindergarten and another amazing educator Laurel Fynes @kynderynes has an amazing post:
https://vine.co/v/h2BJOWgBAvz/embed.

Well this got me thinking about a simple provocation of my own.  Today I put up three words on the board (other words where from previous white board use): 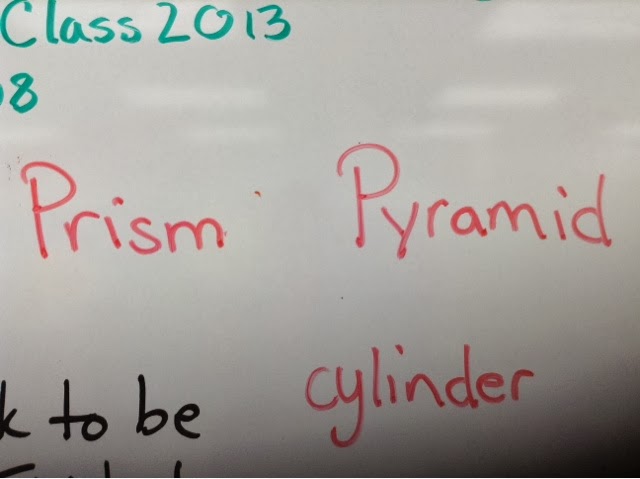 I then put out three bins of 3 dimensional solids and had the kids name the solids.  It was truely amazing to see all of the kids working at this task.  You can read all about the lesson on my storify:
http://sfy.co/fXm9.  I know that those three words don't mean much but they were enough to get the students thinking and moving towards understanding 3D figures.  In fact shortly after this we had a talk about the properties of 3Dfigures. Here is what they came up with: 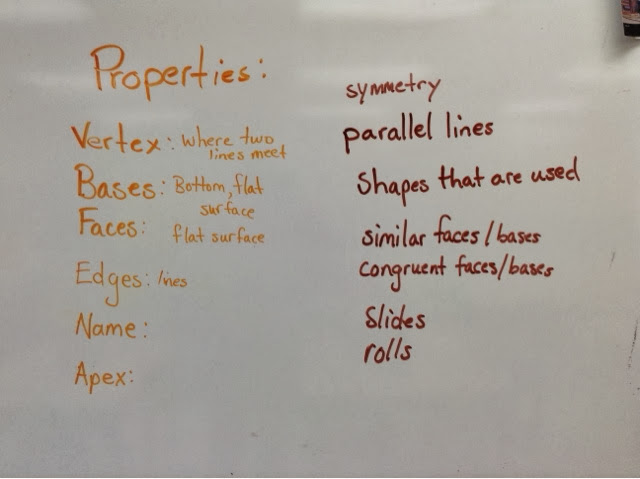 I then had the students take the IPads and use educreations to talk about the shape name they chose and why.  Tomorrow we are going to have a congress about them and debate the names.  ,y hope is that they will have a better understanding then if I told them.

Now you may ask me how is this different then any other lesson.  Well for me not much, except my provocation became my context. Normally, I would have a minds-on activity and then set a context for the learning.  Today the provocation became the reason my kids wanted to learn.

However, from a traditional text book a lot has changed.  Think back to how you learned geometry. If you were like me it was the teacher pulling out shapes and 3D figures (even though I was told shapes) and then proceeding to tell me their properties.  We then opened the textbook and practised.  Now you reflect, which method will help kids understand, one I which they developed understanding and then consolidated it by having peers validate their findings or one where the teacher did the learning and the students absorbed the learning?

What provocations allow a teacher to do, is set-up a context for learning.  It hooks a student into the problem and makes them want to explore further.  I am still new at this and I no means an expert, would love to hear your thoughts on the subject.  Any provocations of your own to share? How would you use it I the classroom?